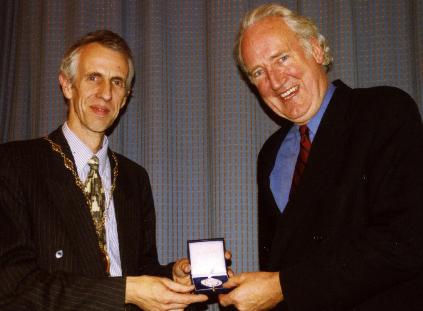 Genes and Cancer:
Hope or Hype?

At the Royal Museum Lecture Theatre,
Chambers Street, Edinburgh
on Monday 3 December 2001, at 7.00 pm
(Doors open 6.30pm)
Enter by the Lothian Street door, at the rear of the Museum

The human genome project has raised the public's awareness and expectations. How will this astonishing technology impact on healthcare in the future? And why single out cancer?

The new genetics is firmly associated with cancer because much of the technology emerged from cancer research laboratories. Also, some of the most important genes cloned to date have been in the cancer arena, such as BRCA2. The discovery of this gene led to detecting women at very high risk of breast cancer, and has provoked the first discussions about issues such as the implications for life insurance and employment.

The tumour suppressing gene p53, from the CRC unit in Dundee, is a good model to predict the potential of genes yet to fall out of this human genome project. The ability to find mutations of p53 has made new clinical intervention and treatment of a variety of cancers possible. Studies have also demonstrated a potent role for p53 in the field of gene therapy, which really is a Pandora's Box. All this potential with only one gene shows that there is an amazing opportunity ahead which justifies the hope and maybe just a little bit of hype too!