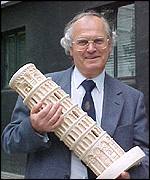 In the Lecture Theatre of the Royal Museum of Scotland
Lothian Street, Edinburgh
On Friday 5th April 2002, at 7 pm

The puzzling history of inclination of the Leaning Tower of Pisa has been unravelled by means of careful detective work on the way the Tower was built. A range of very precise instruments (some dating back to the 1930s, some very modern) are being used to measure the continuing movements of the Tower. The likely causes of this movement have been identified. A sophisticated computer model of the Tower and the underlying ground has been developed. The model, which shows that the Tower is very close to falling over, has been used to assess the effectiveness of various stabilisation strategies. During the last two years the Tower has been stabilised using a novel and controversial method involving soil extraction from beneath the Tower. Professor Burland, who controlled the stabilisation operation, describes the process as rather like riding a bicycle by fax.

This is the Opening Event of the Edinburgh International Science Festival. Tickets are £7.00 (£5.00 concessions - including RSSA Fellows) and should be purchased from the EISF Box Office at

We have information about the Location of the meeting

The Keith Medal for Innovation will be presented to Professor Burland following his lecture.