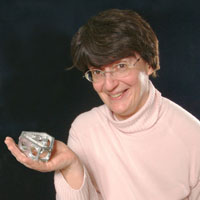 The James Webb Space Telescope, due for launch in 2018, will be the successor to the Hubble Telescope. This multinational NASA-ESA-CSA mission is designed to address key questions about the universe that range from the formation of the first galaxies to understanding planets orbiting distant stars. It will be the largest space observatory ever built and the UK has a leading role in a key instrument called MIRI . This talk will describe the science, the technical challenges of the mission and current status with a special emphasis on MIRI.

Gillian Wright is Director of the UK Astronomy Technology Centre, part of the Science and Technology Facilities Council and based at the Royal Observatory, Edinburgh. She is also the European Principal Investigator for the James Webb Space Telescope Mid-Infrared Instrument, MIRI and a visiting Professor at the University of Edinburgh's Institute for Astronomy. She has 30 years experience of ground- and space-based instrumentation for astronomy and researches galaxy interactions and evolution. Gillian was awarded an MBE for Services to Science in 2006, and is a member of a number of National and International Advisory Panels for astronomy and astronomical instrumentation.