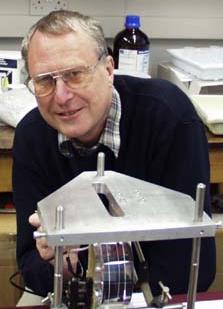 The Search for Gravitational Waves

The Search for Gravitational waves Gravitational waves - a prediction of Einstein's General Relativity - are still among the most elusive signals from far out in the Universe. Over the past decade the long baseline interferometric detectors LIGO, Virgo and GEO 600 have been commissioned and operated at their design or close to design sensitivity. Now these detectors are being upgraded and observations will begin again around 2015 with the real expectation that signals will be observed in the first few years of operation. Such is the current level of confidence that a new detector is being built in Japan in the Kamioka mine. In this talk the nature of gravitational waves, why it is scientifically important to observe them, and the current state of the field will be discussed.

Jim Hough is a graduate of the University of Glasgow where he became Professor of Experimental Physics in 1986 and is currently the emeritus holder of the Kelvin Chair of Natural Philosophy. JH has been Director of the University's Institute for Gravitational Research from 2000 to 2009 and is now Associate Director. A Fellow of the Royal Societies of London and Edinburgh and a member of the Scottish Science Advisory Council, he combines continuing research into the quest for gravitational waves with being Chief Executive Officer of the Scottish Universities Physics Alliance (SUPA).