Listening to Einstein's Universe: the hunt for gravitational waves 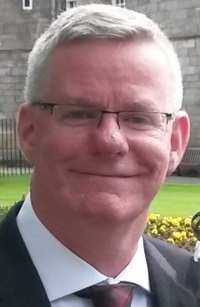 On September 14th 2015 two giant laser interferometers known as LIGO, the most sensitive scientific instruments ever built, detected gravitational waves from the merger of a pair of massive black holes more than a billion light years from the Earth. LIGO estimated that the peak gravitational wave power radiated during the final moments of this merger was more than ten times greater than the combined light power from all the stars and galaxies in the observable Universe.

Join Professor Martin Hendry as he recounts the inside story of this remarkable discovery - hailed by many as the scientific breakthrough of the century. Learn about the amazing technology behind the LIGO detectors, which can measure the signatures of spacetime ripples less than a million millionth the width of a human hair, and explore the exciting future that lies ahead for gravitational-wave astronomy as we open an entirely new window on the Universe.

Martin Hendry is Professor of Gravitational Astrophysics and Cosmology at the University of Glasgow, where he is currently head of the School of Physics and Astronomy.

He is a member of the LIGO Scientific Collaboration - an international group of more than 900 scientists who, with their colleagues in the Virgo Collaboration, in February 2016 reported the historic discovery of gravitational waves.